The Deities : Giko and Rekko.

The former is well known among Japanese people as Mito Komon, or Tokugawa Mitsukuni (1628-1700),the second lord of Mito clan, and was loved over the whole length and breadth of Japan, while the latter is generally known as Tokugawa Nariaki (1800-1860),the ninth lord of Mito clan.

The Foundation of the Shrine (Jinja).

Tokiwa Jinja was founded in Meiji 7 (1874). But before then, at the Kairakuen-park, there was a small Shido, or hall of worship, that enshrined the spirits of two great feudal lords, Giko and Rekko. The old feudal retainers continued to pay their homage at this small shrine, and they petitioned that an official shrine worthy of the Deities might be erected. On the 27th day of March in Meiji 6 (1873), this was sanctioned by the Government, and named Tokiwa Jinja. The shrine, in that year, was graded highly as Bekkaku-Kanpeisha,or a National shrine. Finally after the sanction of the petition, a site of the official shrine buildings for the great feudal lords was chosen, and the construction of the new shrine buildings for them was started. Then this project proved so popular that the people, not only in Mito itself, but in all the outlying villages, void with one another in making contributions in money, or in kind, or in labor. Thus, by the 12th day of May in Meiji 7 (1874), the handsome buildings had been constructed, and then the Senzasai, or ceremony for removing the divine spirits from their temporary abode to the new shrine was held solemnly. Nowadays, it is still commemorated annually as the Reisai, or annual festival. 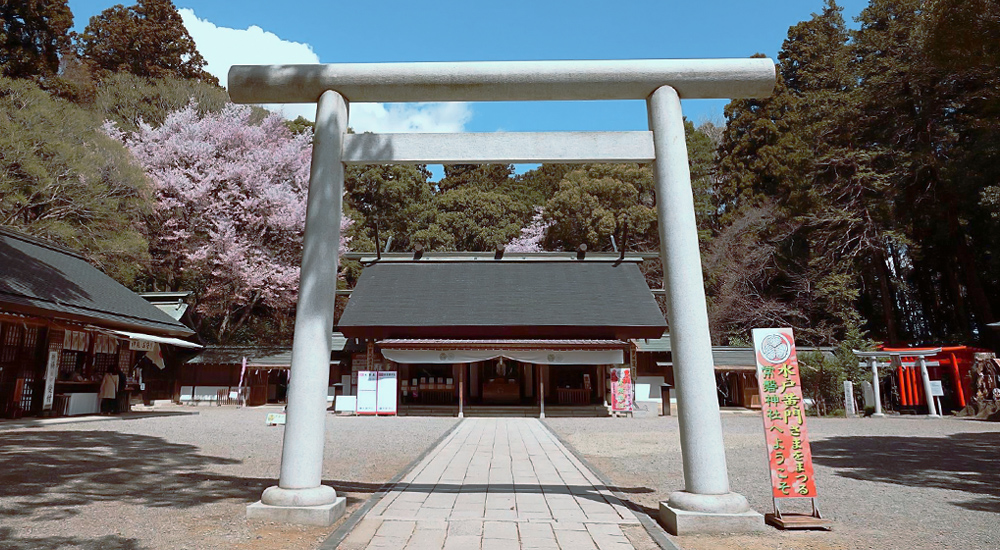 The Virtue of The Two Deities.

Mito in Tokugawa Japan (1603-1867) was one of the most important clan as one of the three main families of the Tokugawa Shogunate. Giko was the third son of Yorifusa(1603-1661), the eleventh son of Ieyasu, who had received the fief of Mito from his father. Giko left the greatest impression in the area. And as a highly regarded scholar as well as a beneficent ruler, he made a name for himself by starting the edition of the Dai-Nihon-Shi (great history of Japan). This work of historic compilation brought about the formation of a special school of historical science, known as the Mito-shigaku, and the Mito-gaku. This then, exercised a great influence in bringing about the Meiji restoration in 1868. He also promoted the development of local industries and water-work projects. Rekko earned a place in the annals of Ibaraki and Japanese history as the builder of Kodokan. the clan school in which were taught the arts of the pen and sword. His simple yet virile spirit still lives on today and can be seen in the present-day of Mito. Both Giko and Rekko made it their aim to lead their people in what they called the Kodo, the path of righteousness and Tokiwa Jinja carries on their great work.

Kairakuen, one of the most celebrated gardens in Japan, was built by Nariaki Tokugawa(1800-1860), the ninth Lord of Mito. The name of the garden “Kairaku” means “to share pleasure with people”, and the garden was opened to the vassals of the Mito Clan and all people of Mito for their intelectual entertainment and amusement. Nariaki, who pondered over the idea of designing the garden by himself, decided upon the place and structure of Kobuntei, and started construction in 1841. The main part of the garden was completed the next year. From the garden, the pastoral landscape of Japan can be enjoyed. The garden is in harmony with the surrounding nature, and in each season the garden has a tasteful and elegant atomosphere. In Kairakuen, more than three thousands plum trees are planted, and in early spring many people enjoy the flowers and thier fragrance. 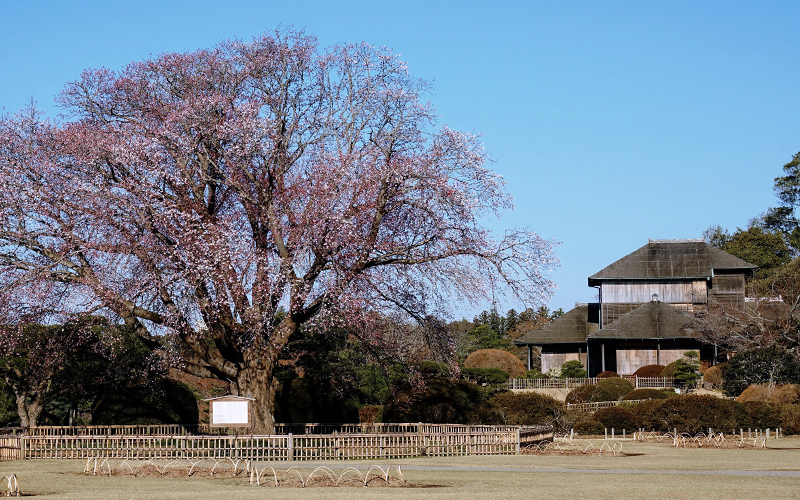 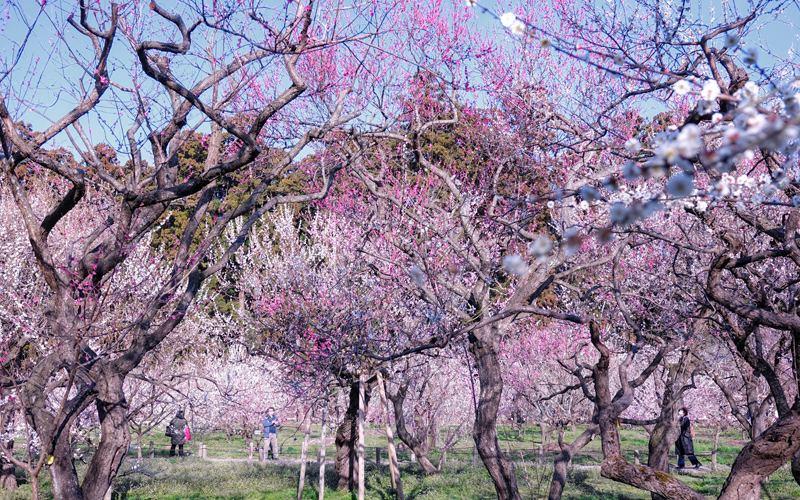 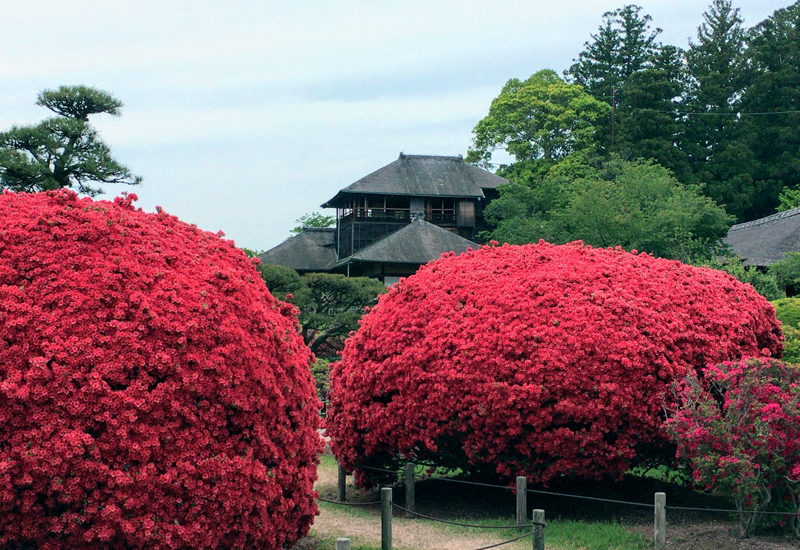 What is Kodo or Widening the Way? It is man himself that can widen the Way. What is the Way? It is the Great Law of Heaven and Earth, from which mankind cannot detach itself even for one single moment. Why has the Kodokwan been established? Reverently I express the humble opinion that in antiquity the Heavenly Deity established the foundation of the Empire, and founded the dynasty. And thus a happy order has prevailed throughout Heaven and Earth and all things are flourishing. Owing to this Way the Heavenly Being illumined the “Six Quarters” and ruled over the universe, and thanks to it, Emperors have ruled without interruption, the State has achieved its sublime dignity, subjects have enjoyed tranquility, and the surrounding barbarians are completely quiet. The Emperors of divine descent, however, far from being self-satisfied, rejoiced in doing good, profiting by such wise examples as they might find among others. To cite an instance, the ideal government administration and the education of the Western Land of Cathay during the To (T’ang), the Gu (Yu) and the “Three Dynasties” were adopted, to supplement the Imperial Way. Thus fostered, the Way became more and more broadened and brightened. From the middle ages onwards, however, alien heretical doctrines deceived our people and enchanted the world, whilst unprincipled literati and men of false learning, misled by imported foreign teachings, lost their hold on the truth. In consequence the Imperial sway became gradually weakened in practice, and led to frequent outbreaks of natural disaster and civil strife, the Grand Way becoming obscured for long ages.
Our Toshogu, renowned for virtues both civil and martial, quelled civil strife, and restored peace and order in the Empire, at the same time revering the Emperor and expelling the barbarians. Thus the period of great peace ensued.
Our ancestor Iko became the first feudal lord of the eastern part of Japan. In his early days, he admired the brave personality of the Imperial warrior Prince Yamato-takeru, held steadfast faith in Shinto, or the Way of the Gods, and exercised himself in military readiness.
Our Giko, the successor of Iko, was a great admirer of Hakui (Poh I) and Shukusei (Shuh Ts’i), and while young, he reverently adhered to Confucianism, so that he not only enunciated Confucian morality with great clarity but also readjusted names, according to their true nature. He was a bulwark of the State.
During more than one hundred years we have had the honour of enjoying our ancestral legacy from Giko as well as the gracious favour of both the Imperial House and the Shogunate Government. How can we descendants remain inactive without undertaking the propaganda of this way and without revealing to the world the virtuous merits of our ancestors in the past? It is with this aim in view that this Institute has been founded.
Why then is the God Takemikazuchi reverently enshrined in this Hall? It is because, in ancient times, He participated in the heavenly meritorious work of establishing our Empire, and even now his powerful divine spirit hovers over this eastern district, Consequently we consider it most proper to direct the people to recognize and remember well how the Imperial Domain was first founded, and to show grateful appreciation to the initiator, besides leading them fully to recognize the origin and growth of the Way.
What has made us dedicate a temple to Confucius in this precinct? The reply is that Confucius was a sage by whom the true essence of the Way of To (T’ang), Gu (Yu) and the “Three Dynasties” has been transmitted to us, and we have been nourished with his teachings. Therefore we reverence his virtuous personality, and ardently desire to let the people know that it is quite natural for the Way to become greater and greater, and brighter and brighter.
Oh, ye retainers, both samurai and commoners, living in this castle-town, be diligent at your studies in the Hall, from morning till night, take steadfast hold of the Way which, re-inforced by the teachings of the Western Land of Cathay, is indigenous to the Divine Kingdom. Know that loyalty and filial piety are one and the same thing; remember that the pen and the sword are bound together, that learning and its practical application are inseparably connected, that, paying homage to the Gods with reverence and awe, while at the same time embracing Confucianism, we should be impartial and do justice to both, that listening without restraint to the advice of thoughtful people and making the best use of the strength of every one, we should be grateful to the Imperial State for its countless favours bestowed upon us in the past. With all these things successfully observed, we are confident that not only the ideals and purposes of our ancestors will be realized, but also that the divine Imperial Ancestral Spirits in Heaven will be pleased to descend to help us and favour us here below with their divine presence. The Head of Administration and Education, Founder of the Institute, Gonchunagon Jusammi Minamoto-no-Asomi Nariaki. Third Month, the Ninth Year of Tempo, Composed, Written and the Title Subscribed by Nariaki.